No longer the poor cousin of Hanoi and Saigon, Da Nang is asserting itself as a thriving metropolis in its own right with entertainment, events and accommodation to rival the rest of Vietnam and Southeast Asia.

A quarter of a century ago, it was the beach, the blood and the bikinis that introduced prime time television audiences to Vietnam’s third-largest city, Da Nang, and its idyllic coastal strip. Only then it was known as the fictitious China Beach, a nickname bestowed on the vast expanse of golden beachfront known locally as My Khe.

Forbes Magazine dubbed the strip “one of the world’s 10 most luxurious beaches”. My Khe melts seamlessly into Nam O, Xuan Thieu, Thanh Binh, Tien Sa, Son Tra, Bac My An and Non Nuoc with all facing east out to the famous South China Sea in an area taking on a persona much like Australia’s Gold Coast.

While the remnants of the vast US Air Base and hospital facilities remain behind a high wall easily visible from the seaside boulevard, it is this burgeoning resort development that now occupies the landscape. All along north-south running Vo Hguyen Giap Street from the ‘armpit’ of the Son Tra Peninsula and almost all the way to Hoi An, 30 kilometres further south, the perfect sands seem to go on forever.

Australians arriving at the sprawling former airbase and now Da Nang International Airport mostly only glimpse these sumptuous resorts from the window of their speeding taxi or minibus as they are hurried post haste to the UNESCO-listed ancient city of Hoi An. But local tourism authorities are keen as mustard to keep international visitors lingering in their growing dynamic metropolis.

The catalogue of resorts reads like a ‘Who’s Who’ of the premium hotel industry with absolute beachfront properties stretching as far as the eye can see. Not all share the same level of success, unfortunately, as every kilometre or so a skeletal concrete structure signals a stalled development.

Such is the pace of progress here in Da Nang that the local authorities have decreed that if a developer cannot complete a project within a specified timeframe (often one year), the right to use the state-owned land and any structures are forfeited and returned to the people.

Riverside Fun
Adjacent the CBD and along both sides of Han River, further developments signal Da Nang’s arrival as a 21st Century business and leisure powerhouse. Every night the bright lights flicker and cascade along the banks, illuminating the spectacular 666m Dragon Bridge, which delights locals and visitors by belching fire and water every weekend at 9pm.

In the evenings, especially on the weekends, families are out in force enjoying the many riverside amusements and stalls including the Helio Center, a large complex chock full of fun including a bowling alley, a synthetic ice rink and too many electronic games to count. Handy for keeping squealing tweenies and teenagers occupied for hours.

Out on the river, cruise boats chug up and down taking in the vibrant colours of the illuminated attractions like the giant Sun Wheel, Da Nang’s answer to the London Eye or the Singapore Flyer. Dining options are bewildering too, but you can count quality international and local cuisine with great views at Chef Brandon Winkeler’s Waterfront Restaurant and Bar.

Mountains of Marble
Easily seen from the beachside Vo Hguyen Giap Street are a cluster of five monolithic outcrops jutting out of the plain. Called Marble Mountains, which is a bit of a stretch, the massive natural formations certainly are imposing. You could easily imagine Viet Cong spies atop the peaks observing US air movements at the nearby base during the closing stages of what we call the The Vietnam War. Once a solid climb, an elevator has been installed in the largest one, Thuy Son, making the upward excursion simple. From there you can enjoy the view and check out the ancient Buddhist relics and caves before either taking the lift back down or descending the stairs.

You’ll also note a great many marble carving workshops in the neighbourhood and, like me, you’ll be drawn to wonder how long these ‘mountains’ will last at the rate the marble is being quarried. But apparently the stone is now coming in from China to preserve the integrity of the mountains. Thank goodness. 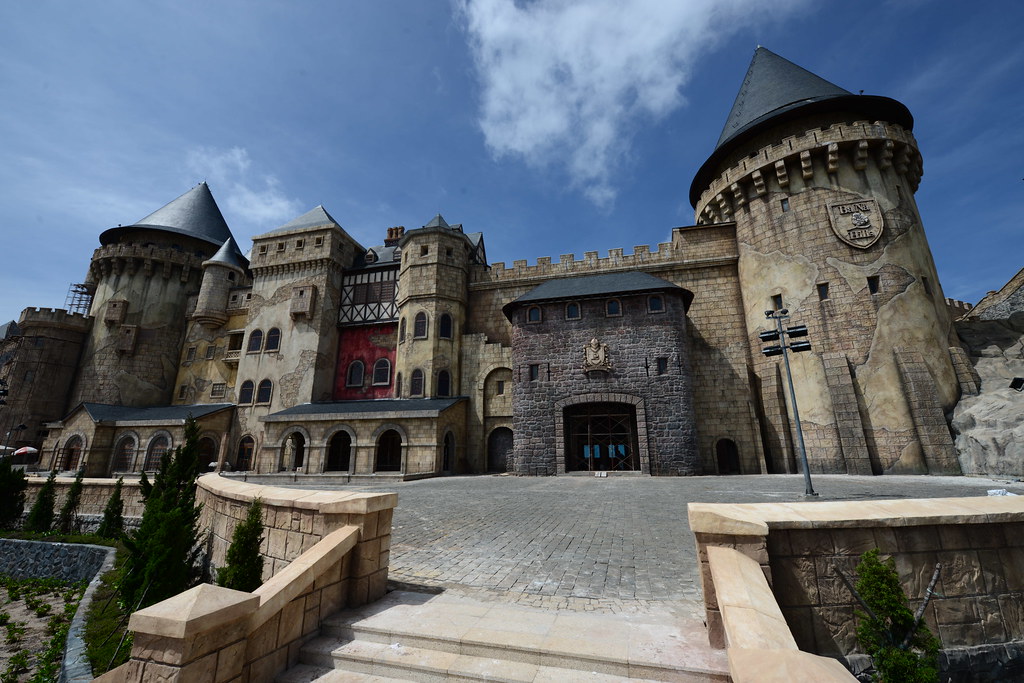 Fantastic Ba Na Hills
Back in the mid-19th century when France held sway over Da Nang and most of Indochina, the colonial rulers headed for the hills to escape the oppressive heat on the plain. In 1919, the equivalent of a hilltop resort was established 38 kilometres southwest of Da Nang, while very little remains of the original French structures, it has been rebuilt in spectacular fashion by Vietnam’s own oligarch, Russian-educated Le Viet Lam.

To access the vast mountaintop complex, one must first drive out on a near-empty six-lane freeway, built expressly for the purpose. One could well imagine environmental impact statements being rushed through the planning committee late on a Friday afternoon as the wide highway cuts a swathe through wetlands and forests to arrive at the ground station for the Guinness World Record-holding, six-kilometre cable car system that has replaced the old winding track to the near-1500m summit.

Arrival at the summit is another experience again. Opened in 2015, the entire complex is built to resemble a French medieval village, complete with a walled citadel, castle, 59-room three-star hotel, 484-room four-star hotel, 300-delegate conference centre, cathedral, amusement park, seven restaurants, tramway and replica French gardens. In deference to the Buddhist Vietnamese, a ‘spiritual’ shrine and garden is also part of the complex. ‘Staggering’ is an understatement.

Catering to well-heeled local families, international visitors and the wedding and conference market, there are also the occasional ‘wild card’ entertainment shows put on in Du Dome Square. I say ‘wild card’ because these mixed burlesque/cartoon/mythology/disco shows seem to be part mardi gras, part Disney-esque parade. Bewildering, goes only some way to describing the open-air floor show.

If you choose to dine on the mountain, a better bet would be one of the ‘à la carte’ restaurants or even the Kavkaz ‘street’ BBQ rather than the food hall we chose.

The Big Bang Theory
Thrusting Da Nang onto the international stage is the biennial Da Nang International Fireworks Competition (DIFC) won this year by Australians Howard & Sons against stiff competition from four other teams from the US, South Africa, Poland and the host Vietnam.

To be held next in 2017, the entire city is taken over by this lavish pyrotechnic extravaganza. Grandstands are installed along the Han River for the two nights of performances where tonnes of colourful computer-controlled explosives are detonated in choreographed splendour.

The $2.5 million event is funded primarily by business sponsorships and is accompanied by street parades, decorations and mini-festivals.

Hotel accommodation is stretched to the limit as the April event gobbles up every one of the 475 hotels and resorts’ 16,000 rooms. Intending visitors are advised to book early and pay a deposit to avoid disappointment. 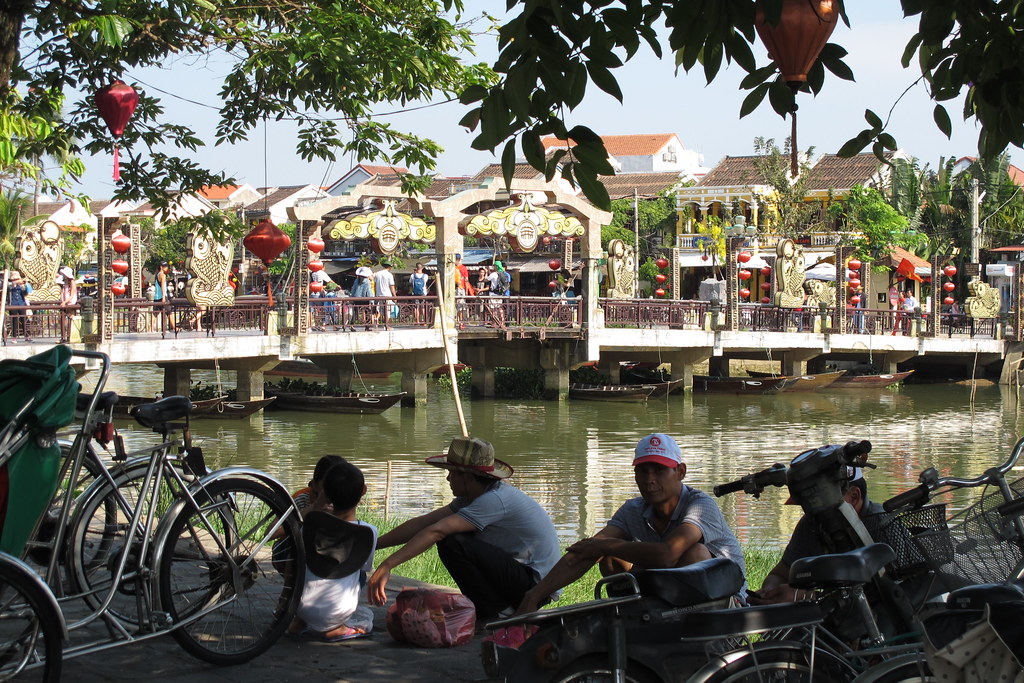 A taste of Hoi An
This familiar destination for many Aussie Asiaphiles is that place most likely calling out to us from the glossy brochures or Lonely Planet guidebooks, namely the UNESCO World Heritage-listed ancient city of Hoi An.

A glaring contrast from the brash pace and bright lights of Da Nang, Hoi An was inscribed by UNESCO in 1999 as a well-preserved example of a Southeast Asian trading port of the 15th to 19th centuries. As a visitor, Hoi An is a delightful city to explore. Flat and easily navigable by bicycle, it is quieter and less frantic than many Vietnamese towns and cities. The narrow streets of the old town are full of shops, eateries and galleries that make a relaxed stroll or casual cycle the perfect way to get around.

The popular riverfront precinct is the place to go for coffee, ice cream, a beer or food of all types. There are four museums covering history, culture, folklore and crafts like ceramics. Shoppers will delight in the vintage leatherwork and tailoring as well as art and crafts.

A highlight of any visit to Hoi An should be to see the iconic, 400-year-old Japanese Bridge that has become the architectural symbol of the city.

For a fun activity, visit Red Bridge Cooking School and restaurant a short distance from the main town and situated along a quiet stretch of wetlands. Not only will you learn some of the art of Vietnamese cooking, but you’ll get a decent feed and a river cruise. •

Getting There
Vietnam Airlines, VietJetAir, Jetstar and SilkAir service Da Nang International Airport with routes via Ho Chi Minh City and Singapore.
•    Vietnam Airlines: vietnamairlines.com
•    Jetstar: jetstar.com
Australians require a visa to enter Vietnam which can be obtained either via the embassy or an accredited agent such as visaonlinevietnam.com